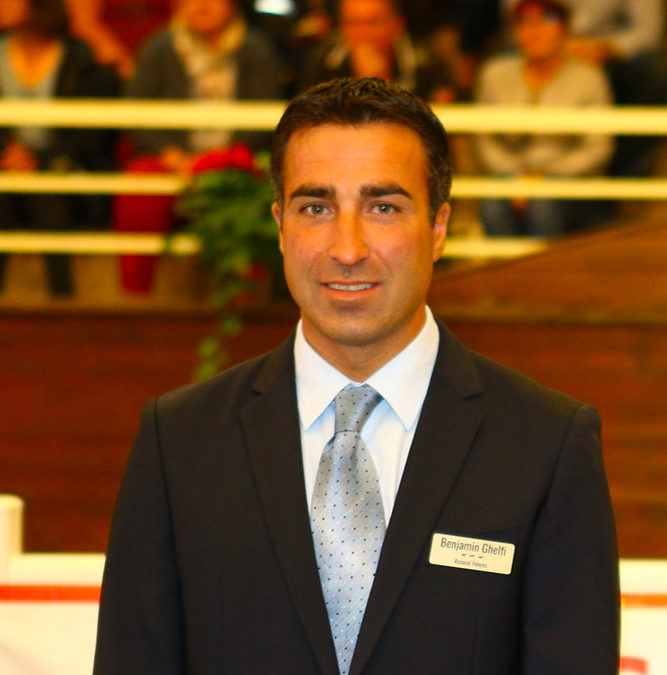 This winter, Arnaud Evain gave the presidency of the Fences agency to Benjamin Ghelfi, organizer of the famous Elite auctions of Bois-le-Roi, which take place every end of summer in parallel with the Grande Semaine de l’élevage of Fontainebleau, but also commercial events on the web.

The off-season was active for the Fences Agency, which announced new projects and a change in its governance. While the historical team pillars, Marcel Rozier, Bruno Souloumiac, Bernard Le Courtois and Arnaud Évain, are still present, alongside Jean Foucart, Jean-Yves Camenen, Bernard Demets, Laurent Guillet, Emmanuel Portet and Thierry Rozier, the presidency of the agency has been assigned to the youngest of the ten partners, Benjamin Ghelfi, who becomes the current sales coordinator and the driving force behind the new projects. Benjamin Ghelfi has been a horse dealer and rider at the Barquet stud farm in Saint-Benoît-d’Hébertot, Calvados, for fifteen years. He is a well-known personality in the world of the sport horse trade. Always looking for development based on teamwork, he joined the Fences adventure seven years ago while creating an innovative concept of infrastructure pooling called Jump Alliance. He now shares the Barquet with François-Xavier Boudant and Rudy Cock.

Within the Fences agency, Benjamin Ghelfi will be able to rely on a team of five permanent staff members, led by Jeanne Cotreuil, who have just moved to new offices in Falaise, Calvados. Elite sales will take place as always at the Espace Rozier in Bois-le-Roi, during the Grande Semaine de l’Élevage, from 1 to 6 September. The Fences Web calendar should be similar to that of 2019 but the agency has new projects including an online sale, in partnership with the Stud-book Selle Français, of around twenty stallions qualified for the national final in Saint-Lô on February 20th. The catalogue will be online at the beginning of February and the horses will be reviewed at the final and put up for sale on Fences Web three days later, on Tuesday 25th February. “Fences affirms its desire to remain a European leader in the sport horse market,” concludes the new president.